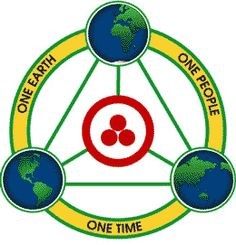 Thirty years ago, on August 16 & 17 the largest global meditation for peace occurred worldwide. There had never been anything like The Harmonic Convergence. It was organized by Jose Arquellles.

José Argüelles, January 24, 1939 – March 23, 2011) He held a Ph.D. in Art History and Aesthetics from the University of Chicago and taught at numerous colleges, including Princeton University, the University of California, Davis, the San Francisco Art Institute, and Evergreen State College. He founded the first Whole Earth Festival in 1970, at Davis, California. He is best known for his leading role in organizing the 1987 Harmonic Convergence event, and for the central role that he played in the emergence of the 2012 phenomenon. Towards the end of his life, Argüelles focused on issue of consciousness, elaborating the concept of a noosphere (based on the work of Teilhard de Chardin and Vladimir Vernadsky) as a global work of art. Specifically, he envisioned a “rainbow bridge” encircling the Earth.

“In 1987 José Arguelles launched a word-of-mouth Harmonic Convergence campaign calling for 144,000 “Sun dancers” to gather near sacred sites at dawn on August 16 and 17 to “open the doors to the final 26 years of the 5,125-year Mayan Great Cycle,” an era of unprecedented change and preparation for a new evolutionary cycle on Earth.

The Harmonic Convergence was celebrated worldwide by tens of thousands if not millions of people and marked the first time human beings simultaneously coordinated their prayers, meditations, and ceremonies at sacred sites around the planet. This was the first manifestation of a networked thrust toward a unified moment of collective synchronization. Everyone from Shirley MacLaine to Timothy Leary to John Denver celebrated the event. Even talk show host Johnny Carson got his studio audience to OM on behalf of the event. Many people reported significant shifts in consciousness and a reorientation in their life patterns.”

This monumental event occurred before the internet, which made it extremely remarkable. There is a ton of significance for this event and there is a lot of information available to delve into it astrologically, astronomically, and historically.  For me it was extremely significant because I participated in an arranged meditation. I was living in New London, CT. I was invited by some friends to attend a meditation in the woods. I don’t remember where. I do remember the woman who organized it, however, a couple of years ago, she and I connected on FB and she doesn’t remember who told her about the event.

We sat in a circle for about 2 hours on each day, meditated, sang, and said prayers for peace. I remember being confused because we didn’t really have much information about what was happening.   Wiki says, “The convergence is purported to have “corresponded with a great shift in the earth’s energy from warlike to peaceful.” Looking back now, I realize what a formative experience it was for me. Just knowing and being able to say that I was among the 144,000 ‘sun dancers’ gives me a strong sense of self and pride in my ability to ‘be in the right place at the right time’. Another example of that just as an FYI, I had the good fortune to be in Sedona with Dr. Eugenius Ang on 11/11/11. It was a great opportunity to gather divine energy and grace. (Check out the aura photos I had taken at the end of the 5 days on the More about Celeste page) At 11:11 am and 11:11 pm we did special meditations for world peace. It was very powerful for all of us.

So why aren’t we celebrating the 30th Anniversary of this special event? I have three theories. One is that without Jose (passed in March of 2011) the momentum for this particular event has been lost. Two is because what was predicted to occur within the 5 years post the HC, appears to not have happened or that not much progress was made toward becoming more peaceful, loving, cooperative, and more compassionate. And my third theory is simply that this entire month of August 2017 is one giant continuation of Harmonic Convergence!

This extremely powerful month of opening portals to the Divine and allowing Gratitude and Grace to fill our hearts, bodies, minds, and spirits also precludes the need to acknowledge, clear, and relinquish shadow material. In spite of my near obsession with the Harmonic Convergence this is the first year that I made a personally significant realization about the 16th and 17th of August. Our mom was born on August 16th and she and my dad were married on August 17th. She would have been 90 years old today (passed in 2004). Dad passed in 91 and they had divorced in 1965. If they were both alive and had stayed together they would be celebrating their 70th anniversary tomorrow. Needless to say their marriage was so far from being harmonious that I hadn’t thought about their anniversary in years, until this past week. I realized these dates have had a very personal meaning for me. Forgiving them for the far from harmonious life they lived and subjected my siblings and I to, has been extremely difficult. Yet, recently the opening portals of God’s grace has made all my Holy Work of consciousness raising much easier. Opening my mind and heart to receive God’s grace has turned those old painful memories into a positive… without these significant dates I may not have paid much attention to the Harmonic Convergence. That would have been a terrible loss.

It is my fondest hope that we all step up our efforts at harmoniously converging!

Blessings and Love to all,